Though this post was intended to be exclusive to my weekly Fun Facts About English, I feel that, given the events happening in the United States in 2020, this bit of history is quite apropos and a story worth sharing more widely. As Americans, we are being called upon to acknowledge our racist past, join together in solidarity, and move forward with greater efforts to ensure equality and fairness for all Americans — including those seeking asylum on our shores. 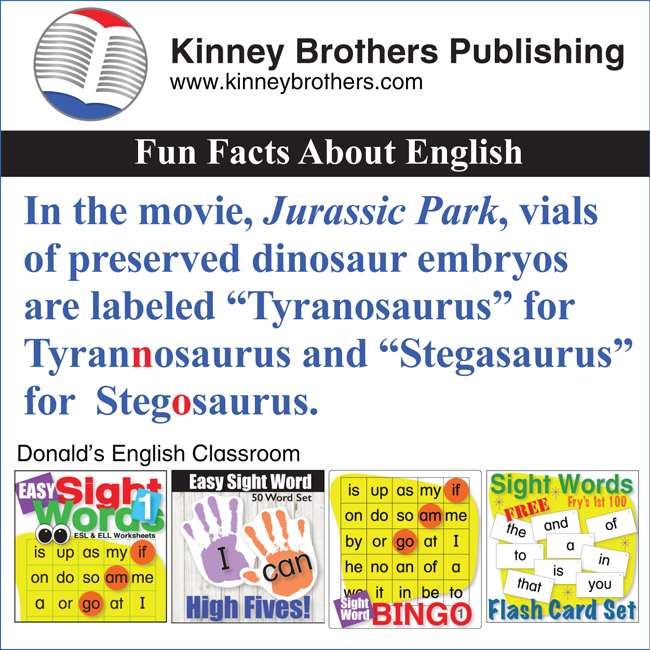 I hate to admit that, even given multiple tries, I probably wouldn’t be able to spell the two dinosaur names above. I sit in awe of people who spell well. I also know I’m not alone when it comes to my spelling disabilities.

The English language has had spelling issues for a very, very long time. In centuries past, there have been compilers and reformers who tried to catalogue and standardize the English language. From Richard Mulcaster’s The first Part of the Elementarie in 1582, Samuel Johnson’s comprehensive and highly influential dictionary of 1755, and Noah Webster’s 19th century American dictionary, we are making strides toward standardization, but the myriad exceptions force us to rely on rote learning and memory to be a good speller. 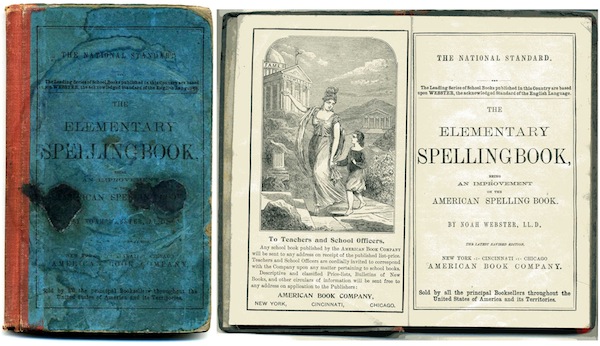 First published in 1786, Webster’s spelling books, known colloquially as “The Blue-backed Speller,” were an essential part of the elementary school curriculum in the United States for five generations. These spelling primers were the impetus for the earliest spelling contests; an activity to motivate students to learn standardized spelling. The first such spelling matches were recorded in 1808. From about 1850, local events were referred to as “spelling bees.”*

Spelling bees were usually held in individual schools and towns and weren’t yet nationally organized. In 1908, the National Education Association (NEA) held the “first national spelling bee” in Cleveland, Ohio as part of its 46th annual convention. The NEA Spelling Bee was a team-based competition held at the Hippodrome Theater where six thousand people attended, including convention speaker, Booker T. Washington.

Even before the competition, some members of the all-white Louisiana team took offense at having to compete on the same stage with Ohio’s racially-integrated teams. Nonetheless, Marie Bolden, a thirteen-year-old Black girl from Cleveland, was named champion and awarded the gold medal. Marie’s victory made national news because it upset the day’s stereotypes about what Black children could or should be allowed to accomplish. Back in New Orleans, the local Black YMCA organized a spelling bee in honor of Miss Bolden’s victory, but the mayor, embarrassed by the upset in Cleveland, withheld the permit and cancelled the event due to tensions “over race questions.”

Seventeen years later, in 1925, the first annual United States National Spelling Bee was held in Louisville, Kentucky and was sponsored by The Courier-Journal, a local Louisville newspaper. The winner was eleven-year-old Frank Neuhauser. In celebration of his victory, Neuhauser met President Calvin Coolidge, was awarded five hundred dollars in gold pieces, given a hometown parade, and a bicycle by his school in Louisville.

In 1941, the Scripps Howard News Service acquired sponsorship of the spelling contest, and the name changed to the Scripps Howard National Spelling Bee. This was later shortened to the Scripps National Spelling Bee. Today, the organization is administered on a not-for-profit basis by The E.W. Scripps Company from its headquarters in Cincinnati, Ohio.  The contest has been held every year except 1943-1945 due to World War II, and 2020 due to the COVID-19 pandemic. Since 1994, the competition has been regularly televised on the cable-television sports channel, ESPN.

Although most participants are from the U.S., students from countries such as The Bahamas, Canada, the People’s Republic of China, India, Ghana, Japan, Jamaica, Mexico, and New Zealand have competed in recent years.

Spelling matches have come a long way since the early 19th century. Today, we can view the competition from home and watch movies about the fierce competition and gargantuan effort these kids make to reach the grand stage. If you’re a teacher, student, or parent interested in organizing local spelling competitions, visit the Scripps National Spelling Bee website where you can download information booklets and read more about the awesome kids participating in this yearly event.

*The word bee has been used to describe a get-together or communal work, such as a husking bee, a quilting bee, or an apple bee. The word likely comes from a dialectal been or bean, meaning “help given by neighbors” from the Middle English word bene.